Set in bohemian Helsinki after World War II, Tove depicts the life of libertine children's author and illustrator Tove Jansson, creator of the cult children' books The Moomins. Initially a side project, she was catapulted to fame after her lover insisted upon bringing the characters to life in the theatre followed by the books publication in Sweden.

Jansson’s creation, The Moomins, are a family of pale, round fairy tale characters with large snouts. In all, nine books were released in the series, together with five picture books and a comic strip released between 1954 and 1993, syndicated all over the world to 120 newspapers in 40 countries, reaching 20 million readers daily. The Moomins have since been the basis for numerous television series and films. 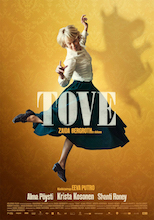